Harder, not in a good way.

Well, Today is Wednesday, so I'm weighing in, and the number is not so pretty, but I think it's because I ate something like six stuffed mushrooms right before bed last night.  :)

Really, I think the closer you get to goal, the slower the weight wants to come off, and that's the truth, dammit.

That's a miserable, lame loss of only .4 pounds for the week.  I DO, however, think it'll be way further down next week.  Here's why:

Dan and I ate out a lot this week.  Even though I made healthy choices the whole way (salads, grilled everything, burger with no bun, etc) - I still have NO clue how much salt was in all the stuff they gave me.  Plus a burger I'd make at home would be around 200 calories.  One they'd give me could be closer to 500 or more!  So, I need to take a break from eating out and focus on my huge salads and at-home recipes.

Here are the official numbers for the day:

So!  I'd now like to share with you a few recipes.  (grin)
Something I'm munching on right now:
Cucumber Salad!
Peel and slice one large cucumber.  (This one was my ginormous cucumber so I did half of it.) 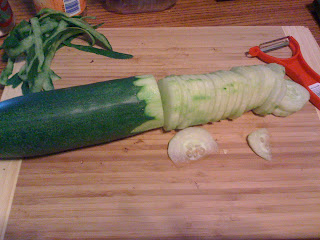 Chop into thick slices, one sweet onion.  Mix them together in a bowl with:
1/4 cup Apple Cider Vinegar
1/2 tsp salt
1 tbsp Splenda
Pepper to your preference 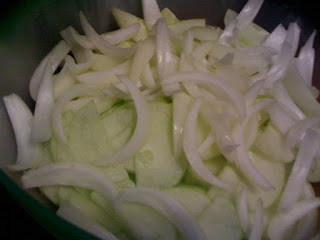 Chill in the fridge for at least an hour.
It's the most refreshing summery crisp salad!  If you like a sweet/vinegary type of taste, you'll love this.

So!  Also I wanted to show you my favorite breakfast: 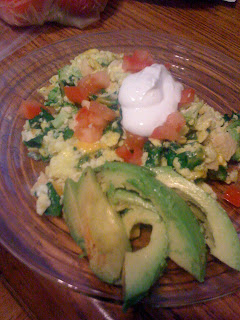 This is 3 eggs scrambled with spinach, broccoli, turkey, red bell pepper, cheddar cheese and topped with chopped tomato, sour cream and 1/2 sliced avocado.  I also like to chop up zucchini lately and sautee it in the pan with mushrooms and broccoli, then add the other things.  As many veggies as I can pack in to my "scrambles" in the morning, the better! :)
Posted by Jennifer Brindley at 12:57 PM

As a restaurant owner, before we give you the burger, we dip it in clarified butter to make it taste great !! Argh.. Only adds 350 calories... Sorry

Hey, thanks for posting the recipes. It's always great to find out what's working for other people!

I made myself a sexylicious salad last night, based on your post a few days ago. DELISH! Thanks for reminding me to include avacadoes. Can't wait to eat leftovers tonight.

Congrats on the loss ... at least the number is going down. I've switched my weigh-in days to Friday because I got off track.

Your food looks so good. I've been so busy at work I never really cook anything. So mainly I've been eating grossness like instant oatmeal for breakfast; deli meat and cream cheese rolls for lunch, and maybe some pre-steamed shrimp from the store and some pre-made seaweed salad and cut up fruit.

I wonder if all the preservatives are slowing down my weight loss. I just wish I had more time! If I cooked, I fell as if I wouldn't have time to work out.

Keep up the good work! (P.S. I am officially down to 30 lbs lost as of this morning)

It's totally true - it does get harder and slower. And I'm impatient dammit.

I am curious about the cucumber salad - I am not a fan of onions but it looks delicious.

Also, I am not a breakfast person but NOW I am hungry!

(BTW. BOO, sodium sucks. You'll be down next week!)

Not a fan of cucumbers, but that scramble thing looks and sounds super good. Definatly am trying that soon!

Hey thanks for the recipes! looking at your progress gives me hope that i will accomplish my goals. thanks for posting!

Average weight loss of 2lb is spot on - it'll stay off easier. And 17lb is really showing going from your latest photos!

I'm slightly perturbed by your breakfast though - looks more like lunch to me!!

Eating in if def. the way to go..I love going out to eat too but I know Im eating a lot less calories and salt overall than when Im eating at home. Good luck on this next week! Your salad looks yummy!!!

Hey! Congratulations on your weightloss!!! I've stumbled a few times too when my weightloss would slow down and would sometimes go back up but then again, our body's weird and then it'll start losing again after resting from the process... I'm sure you're still on your way so don't give up!!! :D You're doin great!