Well, just thought I'd pop in - realized it's been a little while since I came by and updated you guys.

Weight loss is totally at a stand-still, and I'm not exactly sure why.  I have a feeling my body is trudging through the extra pounds / calories from the Thanksgiving holiday when I totally overdid it.  I'll see how things feel in another few weeks.

Hmm, so what else is new?  I made a really yummy dinner the other night.  Now that wedding busy season is done, I can actually cook again.

First I put a pad of butter in the pan, melted it and added 1/2 tbsp of chopped garlic.  Then, two giant handfuls of spinach, and put a lid on it.  This wilts the spinach quickly. :) 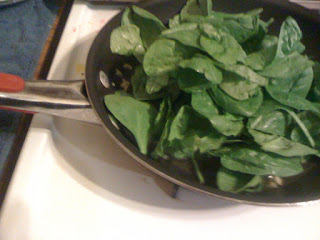 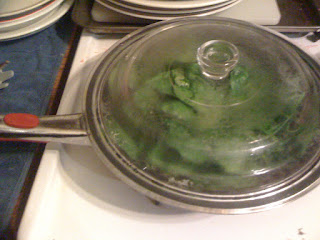 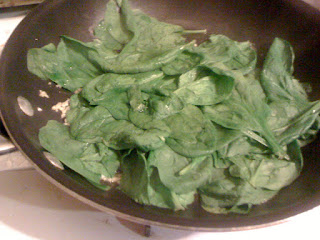 After the spinach wilts I like to sautee it for about 2-3 minutes in the garlic and butter.  A little salt and pepper, and then it's on the plate. 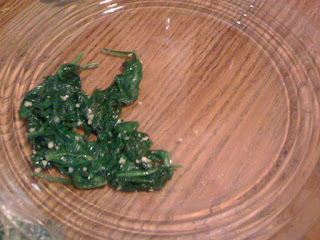 Then in the mean time, I'll have my cod (defrosted / fresh) in a pan over medium heat with some butter.  I like to season mine with salt, pepper, and herbs de provence.  You can use whatever tickles your fancy. 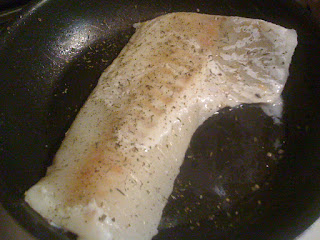 I'll also put a lid on this just to steam the fish a little more effectively.  I find this cooks the fish through so it's nice and flaky, and doesn't produce a browned or crispy exterior on the fish.  I like my fish soft and delicious. 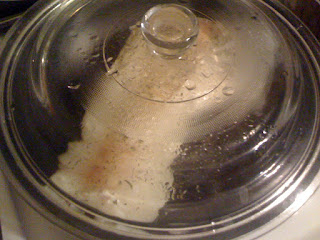 Cod and asparagus both cook VERY quickly.  You seriously only need about 6-8 minutes for the fish and about 5-7 for the asparagus.  Same old story here... just cut off the ends, boil some water and drop 'em in.  When you can easily pierce them with a fork, they're done. 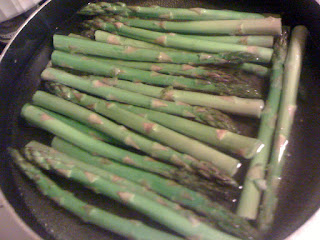 So, put the fish on the sauteed spinach, and serve up your asparagus.  I like butter and salt on mine.  Oh, and I like to put a bit of extra ground black pepper on the cod, and top it off with some paprika for a bit of color. :~) 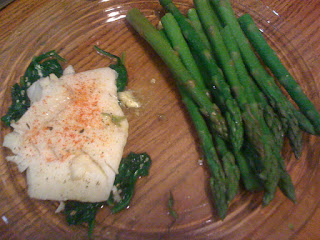 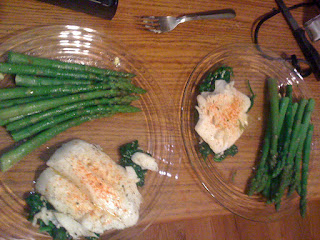 So, there ya have it!  Two healthy and super delicious dinners.  Overall this probably cost me 8 bucks to make.  (The cod was on sale for a little under $4, and the asparagus was probably $3.50 or so.)  :)~

~Jenn
Posted by Jennifer Brindley at 7:27 AM

Dawn Dishes It Out said...

I love the clear plates!! The meal looked super yummy! Keep up the good work.

Great recipe! I've just rediscovered my love for fish that got away from me for awhile!

mmmmmmm...looks soo good. makes me want to try a diet.

Thanks for sharing! Spinach is something I've been trying to tolerate... I think garlic and butter might help things along.

To one ex hot girl from another -

That food looks scrumptious!! I do a creamed spinach that has garlic, a little onion, cream cheese and cream - I call it "Lick the pan good" and it is!!

You're looking AMAZING - so I'm thinking you'll have to change the name of this blog soon!!

great recipe - i have to try this out!